This info is from the 28 June 2019 issue of Science Magazine. I am not saying this is good nor bad, just publishing “only the facts, ma’am!”…

World Population to peak in 2100
Global population growth is predicted to stop – or even decrease – by 2100, topping out at some 10.9 billion people, according to a new United Nations report. The biggest cause: declining birth rates across both developed and developing nations. Right now, the global fertility rate is above 2.5 births per woman – well above the 2.1 births necessary to maintain the existing population. But by 2100, that number is expected to drop to 1.9, according to the report. Fewer births mean the world population is steadily getting older, putting increased pressure on health care, pension, and social welfare systems. The report predicts the global population will reach 9.7 billion people by 2050.

At first, this seems counter intuitive – how can population go up as fertility rate is dropping. The thing is, we are also living longer, the graph of which is not shown. The increasing volume of aging people is included in the numbers.

According to the current estimates, there are about 7,715,150,500 of us alive as I write this. The following chart shows the growth since I began to imagine! 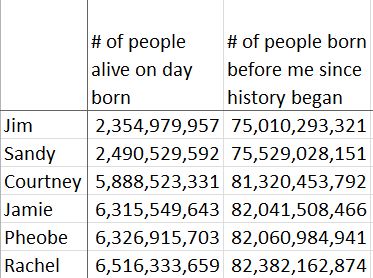 Of course, the Climate Crisis or War or Plastic Pollution or Meteors or Aliens or Time-Travel or Worm-Holes might change those trend-lines. But then, what-if scenarios only tend to complicate forecasts. Like I said “only the facts, ma’am!”…